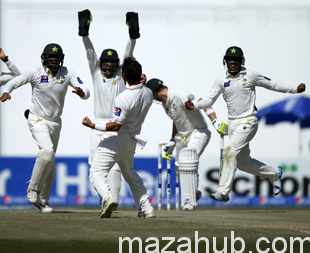 Pakistan played test series against Australia. This series contained two test matches. Before this series, Pakistan had lost the ODI and T20 series. Pakistan has acquired the 3rd position by winning this test series. The credit of these two back to back victories goes to batsmen of Pakistan. Everyone did their best. Plus Bowlers like Yasir Shah and Zulifqar Babar also impressed the coaches, selection team and the nations as well.

Pakistan won the 1st test. This is the huge victory. Everyone did their best. Some batsmen couldn’t do what they were supposed to do. Bowlers especially did best. Major bowlers like Ajmal and Irfan were absent but still Pakistan’s bowlers did not disappoint the nation. New bowler especially Yasir Shah really impressed everyone. Let’s have a look on match. Pakistan won the toss and elected to bat first. In this match, Younis Khan, Azhar Ali, Asad Shafiq, Misbah Ul Haq really made the base for this victory. One man who really made the day was Younis Khan. Younis Khan did century. He scored brilliant century by scoring runs, boundaries. He scored 106 on 223 balls. Most important thing is that it was the century against Australia. Although Pakistan had already lost 2 series but instead of this Younis Khan gathered up the confidence and made century. Younis khan is still considered as one of the best player of test. Due to not performing in some last matches, critics started saying against Younis Khan but he through his performance told them that he is still an active and young player. Besides him in first innings, Azhar Ali and Misbah did fifties. Misbah performance was not as much satisfactory because being a captain and test player, he should had done at least a century because all batsmen were performing on that pitch. Asad Shafiq really made him proof a good batsman. He scored 89 runs and couldn’t complete the century due to Australia bowling attack. Besides all of them, another new, less experienced batsman as well as wicket keeper did amazing century and a bit fast century. Australia couldn’t bear all this pressure. Now in the first inning of Australia, Warner wanted to chase the score with some other player, but other players couldn’t stand with him. He did century but at last, Yasir Shah urged him to return to Pavilion.

Pakistan bowlers out the whole team and Pakistan already got the lead of almost 150 runs. Pakistan started its 2nd inning with a lead of 150 runs in hand. In 2nd innings, Pakistan had high level of confidence that they can win the match easily. Ahmed Shehzad who couldn’t score well in 1st inning did an excellent century in 2nd inning. Younis Khan again made historical century. He did 103 runs and remained not out. Only 2 players lost their wickets and Younis and Sarfraz remained on the crease. At last Pakistan reached to the score of 286 runs with the loss of 2 wickets. Pakistan declared its inning as they already had a lead and overall target became satisfactory. Captain thought that according to overs and target, this score is un-chase able. Australia started its 2nd inning and its plan would surely be to draw the match but Pakistani’s bowler bowled well-done and didn’t allow any player to do remarkable score. Smith and Johnson did fifties but bowlers out them. According to critics, Johnson out was not clear and in case of doubt, decision is generally given in the favor of batsman but umpire didn’t do so. Yasir Shah and Babar really helped Pakistan to win this 1st test match against Australia.