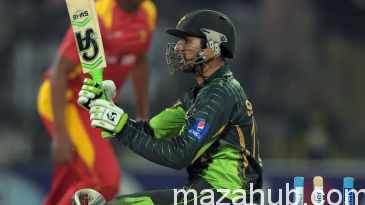 Highlights will be updated here after the match. Let’s see that what happens in the match.

Next match is between the same teams, same format and same players and at the same place. This match is also scheduled in the Lahore. Lahore has the Gadaffi Stadium. This is the series containing 2 T20 matches. 1st match has been played on Friday. 2nd match is tomorrow at the same place. Official timings of the match is 07:00PM. It will start at 07:00 PM. In the last match, both teams played well. Gadaffi stadium has rather sort of batting pitch. That is why, in the last match, both teams did big scores. Zimbabwe did the bat first. In doing so, it gave the target of 173 runs. Zimbabwe did 172 runs in the 20 overs match. Zimbabwe lost its 6 wickets in during the completion of 172 runs.

Once it seemed that it could be the difficult one for Pakistan to chase but then Pakistan really chased the target. Pakistan took the start in fact, very fast. Pakistani openers Ahmed Shehzad and Ahmed Mukhtar really contributed towards the team. Ahmed did very fast fifty. Pakistan made up to 100 runs in just starting 9 or 10 overs. Zimbabwe again did sort of come back and Pakistani wickets started to get down. Pakistan could chase the target in the 16 overs or so but losing of wickets resulted into slow batting.

Pakistan had chased the target in the last over at the loss of 5 wickets. Zimbabwe is in Pakistan. It’s really a matter of pleasure for Pakistan to receive the Zimbabwe here. Cricket comes home. Since Zimbabwe isn’t that good cricket team. Pakistan can win the series very easily. It is the series containing just 2 matches. Series doesn’t contain the odd number of matches. It contain even number of matches. So series can be without any results. Any team who will win the two matches will win the series as well.

If both the teams win one match each, then series will of course be drawn. It doesn’t seem that series will get draw. Pakistan will take away this series. Pakistan has won the first match. Now one thing is clear that Zimbabwe cannot win the series. It can draw the series maximum. For that, it needs to win this 2nd match. It is difficult for Zimbabwe to win the series. Since it is played between the Zimbabwe and Pakistan at the Pakistan, Pakistan is more favorite and choice of people.

Pakistan needs to concentrate on the security of matches more because this time, Pakistan doesn’t have the time to take the chances of risks. Pakistan should assure the maximum security what it can give to the Zimbabwe team. Pakistan needs to win this 2nd match to win the series. Pakistan will win the T20 series then. It will result into the whitewash the Zimbabwe in the T20 series. Even if this 2nd match is drawn, which is usually not possible in the T20 matches, Pakistan will win the series also.

This match is going to be held in ground of Lord’s, London. Now you’ll be able to see the ground stats below.

Today according to weather forecast report weather will be partly cloudy but it will not impact the match at all and there are good condition for playing a match.

Today Pakistan team have more chances to win the toss and choose to bat first according to our astrological calculations.

Total matches played between these two team are 48

The matches abandoned or not played are 02