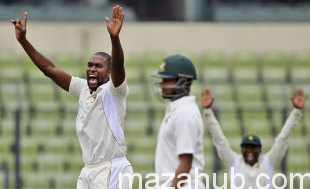 Bangladesh won the first test against Zimbabwe by 3 wickets. Zimbabwe did batted first and could not do much score. In first inning of Bangladesh, they could give lead of only 14 runs and all team had to return to the pavilion. Again in 2nd inning for Zimbabwe, it repeated its weakness and could not stand for long on the crease. Bangladesh easily chased the target and won the 1st test.

This match is going to be held in ground of Sheikh Abu Naser Stadium, Bangladesh. So let’s review the stats of team in this ground

Total matches played between these two team are 12

Bangladesh is bit better than Zimbabwe. Both these teams Bangladesh and Zimbabwe are 3rd class team with respect to their records, performance, players, cups, awards etc. Bangladesh is better than Zimbabwe in a sense that Bangladesh has players which are experienced, famous than Zimbabwe players. Bangladesh’s players have more experience than Zimbabwe because Bangladesh players had played many leagues and this thing help the player at critical points of the match. One more important thing about Bangladesh is that they had organized Bangladesh premier league. After that, Bangladesh appeared as a strong and powerful team performance wise as well as financially. They had earned a lot of revenue from BPL and this revenue helped Bangladesh to purchase experience coaches, trainers, kits and modern technology. Two important qualities are linked with cricket. One is Hardwork and other is extra ordinary skills. Bangladesh players don’t have extra ordinary skills because due to lack of coaches, grounds etc. But Bangladesh players give their full hard work and try their best to give positive outputs as much as they can. Bangladesh has some classic batsmen. Mushfiqur Rahim is the current captain, keeper and batsman of Bangladesh. His height is not suitable but his shots are really tricky and sensible. He can hit big sixes. He is a good finisher and responsible batsman. Many times, he helped Bangladesh by hitting boundaries at the end of the match.  Tamim Iqbal is the vice captain of the team. He is the mature batsman. He usually opens the batting for Bangladesh and generally scores good for Bangladesh. He is extra good at Test because he knows how to save the wicket along with scoring runs. His left handed style helps him to play brilliant shots on the cover.

Zimbabwe is under developed team in a way that they don’t have popular and good players. Batting and bowling both are quite weak. Such junior and inexperienced players also are the cause of poor fielding and this thing lowers the self confidence level of the team. Especially test requires experience as one team has to stay on the crease for 2 days almost and no ordinary player can save wicket for such a long time. Experienced players use to play long innings in test match. It’s not like ODI or T20 in which just boundaries are required. Only one or two players can’t lead the team towards victory in test match. But exact can’t be said because opponent team is not strong like Austrailia or any English team. It is Bangladesh which is more or less like Zimbabwe but much better than Zimbabwe. Captain of Zimbabwe is Brendan Taylor. No doubt, he is the courageous and brave captain. Like Bangladesh, he is the wicket keeper also. As a batsman, he is the strong batsman of Zimbabwe. Masakadza is the another bit experience batsman and left handed bowler.

For the 2nd test, Zimbabwe should try to save their early wickets. Bowling can be compromised against Bangladesh but their batting should give Bangladesh tough time. Bangladesh is most probably going to win this 2nd test too because of its good players as well as its confidence level due to victory in 1st test.

According to ground the team Bangladesh have 80% winning chances