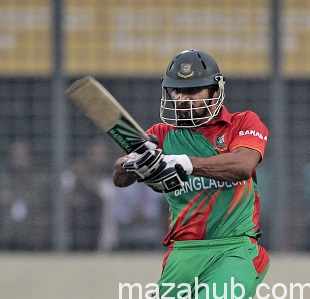 In ODI matches, one needs experienced players who can save their wickets as wickets matter a lot in 50 overs match. Small team does not have such players who can save the wickets and can for such a long time like 50 overs. At least one should play full overs so that score can be maximum. Among these both teams, Bangladesh has good, old, experienced players and can play full match with the team.

Now as we all already knew that Bangladesh will win and they won by 5 wickets.
So as per condition Zimbabwe made just 128 scores in 30 overs with losing all the wickets.
That’s Bangladesh chased and made 130 scores just in loss of 5 wickets . So this is really great victory by them and they completed all the scores in just 24.3 Overs .
So after this all and series is also ended Mushfiqur Rahim is announced as the Man of the Series. Which is really great proud for the Bangladesh team.
In the end Bangladesh won the series with 5-0.

Today temperature will be fine as always and in previous matches in this ground . So we can expect a better match here also but according to previous match on this pitch Bangladesh have more chances to win again. Because they do have the support of home ground also.

As we have again seen the great victory by Bangladesh from Zimbabwe in the recent match . As they have got all the matches of the series like a small kid. As they have professional players which know how to play but Zimbabwe is not too much strong yet. This is the main reason for them to lose the match.

Total matches played between these two team are 66 Zimbabwe has lost the Test as well as ODI series. Credit doesn’t go to Bangladesh team but it all happened only due to very bad performance of Zimbabwe. Zimbabwe players don’t know how to play cricket. Their style and thinking indicates that they are playing street match against some school team. They don’t have any professional looks. In fact, they don’t deserve the victory. Zimbabwe should leave the cricket. It should end the cricket team. If they want ever to win the series or cup then they need to work very hard. It requires long time very hard effort. Its not easy to win the match like this. Two important qualities are linked with cricket. One is Hard work and other is extra ordinary skills. Bangladesh players don’t have extra ordinary skills because due to lack of coaches, grounds etc. But Bangladesh players give their full hard work and try their best to give positive outputs as much as they can. Bangladesh has some classic batsmen.