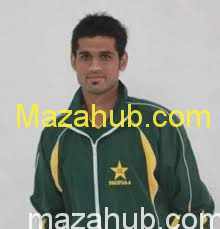 Today I just heard about this breaking news that Pakistan cricket  Board picked Talha who is a right arm pacer bowler and he is a very talented player and this is really intriguing that he’s being chosen by our cricket team to play and we wish him to play against Sri Lanka with his best performance ever .  To fulfil our hopes he’ll strive to play his best in these test matches of the whole series and he also had played against Sri Lanka in 2009 . He was the first right arm pacer in the Pakistan cricket team who played against Sri Lanka . Probably the reason for our winning in that previous series was Talha and now this time he’s going to start with the 15 man squad of the 3 test series.

Talha also didn’t played the series against the England due to the bad injury in his back . And  team also didn’t adopted him for the series of the Bangladesh in 2011-12 . This is a good chance now for Talha to perform his well as he can and he can be the best player of the team .

Pakistan also got Hafeez back in the team because he was out for the South Africa tests but now after a great performance in the one day international against the Sri Lanka and he nearly scored 300 in these matches and now he’s in a good form to play in the cricket team .

Previous: Make a heart shaped egg
Next: Beggars are not the choosers