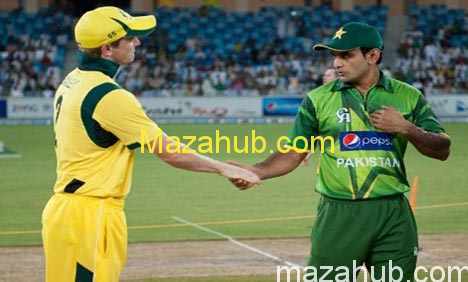 Everyone got an opportunity to see the great entertainment in this match . The match was full of thrill and alot ups and downs occurred during match. It was a real T20 match.

Australian captain George Bailey won the toss and decided to bowl first which proved a wrong decision on this hard surface. Pakistan din’t get a good start and lost the first wicket on the base in the air and Dong Bollinger got an easy catch on his own ball. Shehzad made 6 runs. Hafeez came with positive mind set and hit 2 beautiful boundaries but unfortunately got an inside edge which caused the ball to hit the stumps on Shane Watson’s slow delivery. So Pakistan had lost 2 wickets on just 25 runs in the fifth over the Pakistan’s score was 36-2 in the power play.

As the Power play ended, Akmal brothers got the momentum and started playing the shots all around the ground. The best thing was that they keep on the rotating the strikes and to avoid the dot balls as compared to India’s match. 3rd wicket of the Pakistan’s team was dropped on the 121 runs in the 13th over when Kamran lost his wicket in an effort to hit a six over the points fielder. The Partnership between these two was 96 and Kamran Akmal made 31 runs of 31 balls with strike out of 100. The good thing with Kamran was that he was giving the strike to Umar Akmal who was playing outstanding shoots all around the ground.

After Kamran dismissed, Shoaib Maqsood come on crease but he got bowled by Coulter-Neil on just 5 runs. He tried to pick up the Yorker but failed. But on the other side, Akmal carried on scoreboard moving and then Boom Boom arrived and hit a fabulous six on 3rd ball to Shane Watson. In last over, U . Akmal got catch out on Stare’s delivery in an effort to hit six, on the long-on boundary. He made brilliant 94 off just 54 balls   and played air trails innings. In do 20 overs Pakistan set a target of 192 for Australia. Afridi made 20 off 11 balls while Malik 6 off 3 balls.

In the following of 192, Australia lost 2 wickets on just 8 runs in very first over bowled by Zulfiqar Babar. Warner was bowled while Watson was caught behind the stumps. After that Finch and Maxwell give their team a hope by hitting good shoots all across the ground. In 6 overs of power play the score was 57-2. After that the two overs were very bad for Pakistan. Afridi gave 15 runs in 7th over with 2 sixes while Bilawal Bhatti gave 30 runs with 2 sixes and 4 fours. In 8 overs, Australia was 102-2 with just 90 remaining in 12 overs with RR 7.5 rpo . After that in 12th over, Afridi got Maxwell’s wicket on 74 runs and it approved the turning point of match. In his next over Afridi took Briley’s wicket and now 53 runs were remaining in 6 overs. After that Gul and Ajmal bowled very well and in last 3 overs 31 runs were remaining. Ajmal gave just 1 run and got Finch’s wicket in 18th over. In last over 23 runs were remaining when Bhatti took 2 wickets along with one run out  and Australian batting got an end at 175 and Pakistan won the match by 16 runs.

Previous: And now you’re stuck with me (Episode 3) : Novel
Next: Is Pakistan your favourite cricket team