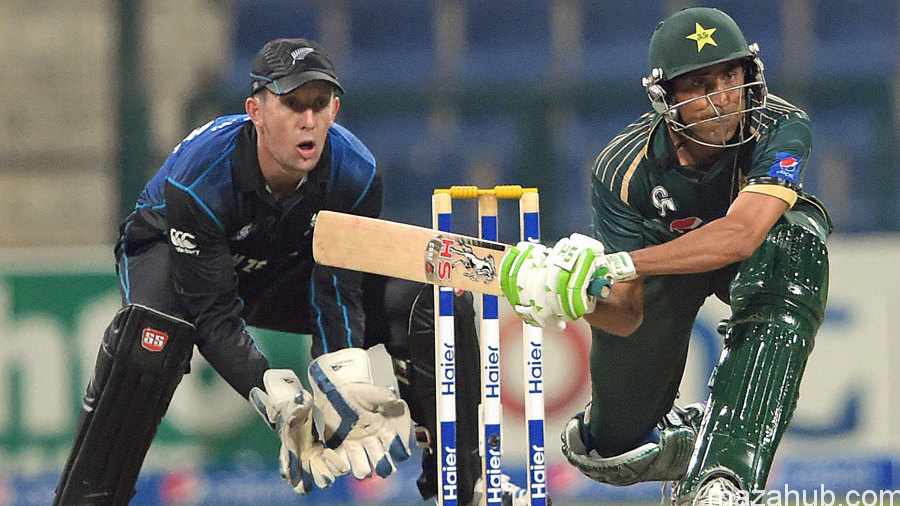 New Zealand players mostly play well on its own grounds and on the pitches of Australia, England, Africa etc. New Zealand usually plays on the fast pitches. In the last matches, New Zealand really impressed as it bowled very well even on those pitches. Due to its strong bowling attack, New Zealand won the 2nd ODI match. Last match will also be played in the UAE. Both teams have equal chance of winning this.

This match is going to be held in ground of Sheikh Zayed Stadium, United Arab Emirates. Now you’ll be able to see the ground stats below.

So this is the record of this series teams most man of the matches players.

The two top bowlers of current ODI series are listed below

Highest partnership by Pakistan team. Which is Haris Sohail and Shahid Afridi for 110 scores long partnership on 8th Dec 2014 ODI.

Highest partnership by New Zealand team. Which is Brownlie and Devcich for 103 scores on 111 balls long partnership In recent ODI.

Forecasters reported that weather will be total fine and beautiful for the match condition to be carried on and this time all have chances to perform their best in the last match of This series.

Total matches played between these two team are 93

Pakistan has played very well in the last match. New Zealand really gave a big target but still Pakistan managed to bring the score as high as possible. It was unfortunate for Pakistan that it couldn’t won the match because match was too close to win. Now all the game depends on the last and final match. Last match will be of great importance as it has many charm now. All the hard work of previous matches depend on the last and final match. One who will win the last 5th ODI, will win the series. In this series, Pakistan and New Zealand won the matches alternatively. Pakistan won the 1st and 3rd ODI while New Zealand won the 2nd and 4th match. 5th match is the total thing that needs to be discussed. Pakistan needs to do hard work to win this last match. Pakistan has the players who have the talent to score high. Most important player at the present time is Shahid Khan Afridi. He is really in very good form. He has scored good runs in all the 4 matches. In the last 4th match, he did 49 scores. Pakistan has one of the good middle order as well finishers. He is Umar Akmal. He is simply talented player. Pakistan has Younis Khan. Pakistan has good bowling length but it couldn’t work in the last 4th match as New Zealand played full over match and scored very high. New Zealand is the team who has really tried very good to come back to series. Although it lost the initial and 3rd match but it had also won the 2 matches. New Zealand has the final now to be played. 5th match matters a lot for both the teams. In the team of New Zealand, all the batsmen are almost hard-hitters except one or two. Also these are the ones who can stay on the wicket for a long. New Zealand has the most experienced and senior spinner and he is Daniel Vettori. He has also taken 3 wickets in the last match as well. He is quite in good form in this series. New Zealand has the Milne. Adam Milne is the best pacer. His all deliveries are almost near to 150kp/h. In the last match, he delivered the fastest bowl of the match and it was 152.4kp/h. Both team should struggle very hard to win this series by winning the last 5th ODI match of the series.