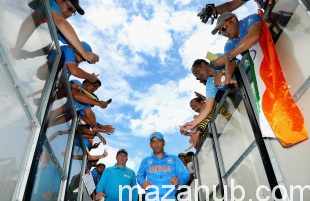 You may Like : South Africa vs India Prediction WC 2015

Match has been started with a good day.
India team won the toss and opted to bat first.

In the early time they lost their first wicket. This wicket was very important. But they’re working hard now. let’s see what happens.

South Africa lost all wickets after making 177 scores in 40.2 overs.

Today 2 matches were played of the world cup. 1st match was of my beloved country Pakistan. Pakistan lost the match due to its bad performance. Pakistan did bowl first and in doing so, it dropped the 6 catches. 6 is the big number and it is enough to accept the defeat for the team.

Death bowling was also the one of the main cause. But 2nd match was between Australia and Bangladesh. That match was cancelled. Match was cancelled due to the rain. It was decided first, that if rain stops early, match will be played between the teams but overs will be less like 35 or something like that.

But rain was not stopped till such a long time. Then this decision was taken that match will be cancelled and both the teams will be given the equal points. Like winner gets the 2 point per match and in cancelled match, both teams will get the 1 point each team.

Bangladesh got the 1 point. Similarly Australia got the one point. Raining actually directly benefited the Bangladesh. Australia is the unbeaten and the most difficult team in this world cup, while Bangladesh is not the strong side. So If this match was played, Australia was of course going to beat the Bangladesh in a very bad way.