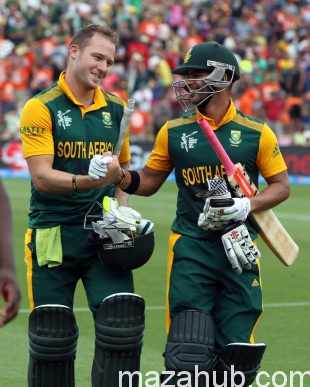 India and South Africa both will play their 2nd matches tomorrow. Before this, South Africa had played its 1st match. India had also beaten the Pakistan in its first match. Today, 2 matches were played between 2 teams. 1st match was between Pakistan and West Indies. 2nd match was between Bangladesh and Australia. In the 1st match, result remained unpredictable and ridiculous. Pakistan lost the match from the West Indies very badly. Pakistan has got the much better team as compared to West Indies, but since it has lost the match.

Pakistani team had dropped today total of 6 catches today in the match. All the catches were dropped from the senior and old players like Shahid Afridi, Misbah Ul Haq, Nasir Jamshed etc. Pakistan needs to consider each and every player in the team. This is not going to work anymore. Pakistan needs very extra ordinary performance and victories in the next 4 matches to qualify for the quarter finals.

If Pakistan wins 3 matches out of 4 next matches, then it will be able to qualify for the quarter final. Death bowling was also poor. At the end, West Indian all-rounder Russel did 46 runs on just 13 deliveries. Pakistan couldn’t control that pressure of the big target and so batting also remained awful. First 4 wickets including the 2 wickets of openers got down on just 1 run.

Then also no partnership could help Pakistan to score better. All the team returned to pavilion at the total score of 160. India and South Africa are the good teams and are at better position on the point’s table. Like India had won its first match against Pakistan. India won that match with great margin.