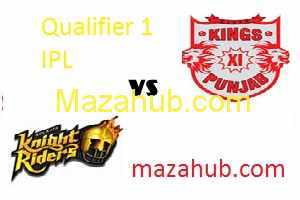 Today is the main 1st qualifier match of Pepsi IPL  is between KKR vs KXIP. This match is very important for both of teams ( In this match the team who will win will directly promoted to the final of this IPL season and the team who will lose the match will get one more chance to play against CSK or MI to qualify for the final. So both teams are trying to win the match for becoming champion. Both teams are in good form and very hopeful for winning this match. Every one is hope for a great match today. It is being held at the Eden Gardens , Kolkata.

Kings XI Punjab Now let’s talk about this team. They are on the top of the Pepsi IPL points table and they are unbeatable in this season. They played really like a king and win the matches. The most dangerous and key player in the KXIP is Glenn Maxwell who is the most favourite player in the Pepsi IPL 2014 series. He is the back bone of this team. He is the match winning player. And the other batsman of the team are also very dangerous  Virender Sehwag the opener of this team is in very good form. The captain of the team is also in good form and lead the team very well. He need no introduction his name is George Bailey. He is good finisher. The one another batsman we can’t forget is David Miller. He also called killer. He is very attacking and aggressive player. The main bowlers of the team are  Mitchell Johnson and Lakshmipathy Balaji these are very good and aggressive fast and spin bowlers. He is the backbone of the bowling side of this team. We can say that Kings XI Punjab are in good form complete and bright chances to win the match as well as become the champions of this tournament. Now let’s talk about the Kolkata Knigh Riders. He is owner of this team and is the great celebrity we all know the name of him SRK ( Shahrukh Khan ). His team is very good and include big name in it’s team. They are playing very well in this tournament. Today the home ground is helpful for Kolkata Knight Riders. The crowd support his team. The captain of the team is Gautam Gambhir. He is very aggressive batsman and also very experience player. His captain is also very aggressive and attacking and the better thing is that he is also in good form and playing very good cricket  Robin Uthappa is also very good player Shakib Al Hasan is now a days in its form and player very good cricket and scoring in every match. The bowlers of the team are also very good. The main bowler is Sunil Narine.
So let’s see the Kings XI Punjab vs Kolkata Knight Riders Qualifier 1 prediction | KXIP vs KKR preview 27 may 2014
Prediction :
On the other hand the KXIP is favourable in this match and have great chances to win this match
Fancy tips of IPL Fancy winner of KXIP vs KKR Kings XI Punjab vs Kolkata Knight Riders match live fancy prediction KXIP vs KKR Fancy prediction KXIP vs KKR who will win ? Match winner prediction Ipl KKR vs KXIP qualifier match IPL betting tips 2014-05-27
Cricket Nandla