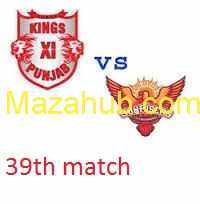 Sunriser Hyderabad will have to face aggressive bats of Glenn Maxwell and David Miller at today encounter at Rajiv Gandhi International Stadium, Hyderabad. Kings Eleven Punjab is at the second position with 14 points winning 7 out of 9 games played while host SRH is at 5th position (4 wins out of 9). KXIP will try to extend its winnings and snatch the first position from CSK.

The batting line of KXIP has been tremendous in the event except last game against KKR where they made just 148/8 in 20 overs on a batting-friendly pitch in Cuttack. All the batsmen, actually the in-form batsmen failed cheaply but the thing KXIP will be delighted was the Half-century from Virendar Sehwag. Glenn Maxwell didn’t show in couple of matches and he will try to do best in the match. Maxwell is the top scorer in the event and will wish to keep his position. Miller is also going well and plays big hits. Skipper George Bailey also pleased Pretty Zinta against CSK when he made 40 on just 13 balls and set up an outstanding target. So, batting line is the positive side of KXIP.
Bowling, along with batting, was also dis-satisfactorily against Kolkata. All bowlers except Akshar patel conceded a lot of runs. Rishi Dhawan and Sandeep Sharma went for a lot of runs with and economy of 8+. Anyhow, KXIP will hope its bowlers including Johnson to go with the new spirit in ground against SRH.
On a batting pitch, SRH managed a total of 157/5 in 20 overs against MI which was easily chased with the help of half-centuries by Rayudu and Simmons. The delightful thing for SRH was that its Australian couple David Warner and Aaron Finch made fifties. SRH will hope the same results from these 2 in today game. Along with these two, Skipper Shaikhar Dhawan will have to put the decent contribution especially in the start of the innings and move toward a decent total. Dhawan will have to prove himself after successive failures. SRH will also hope the emerging hitter Rahul to show the form after 2 consecutive failings.
SRH is having almost the best bowling attack in the edition as they are having Dale Steyen, Bhuvneshwar Kumar, Amit Mishra and Irfan Pathan, all of these to quality bowlers, but they were looking helpless against Rayudu and Simmons of MI. So, they may also be vulnerable to KXIP. Anyhow, they will try to show their class.
This might be a very tough match for both the teams, but on the basis of present performance KXIP is the favourite of today game.