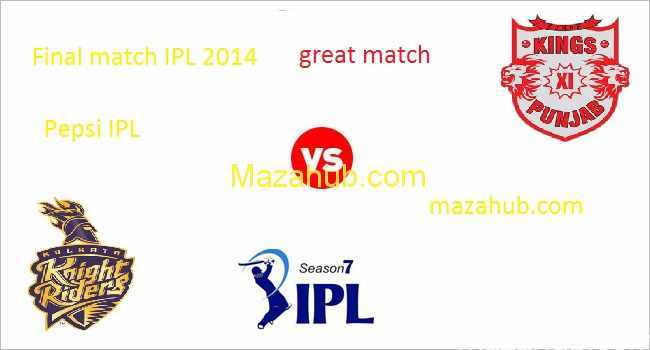 This is the one of the great event of the Pepsi IPL. That event is at last on the end stages and this is the big win for Kings XI Punjab in the last match and they came to the final with a really high score of 226 as total. These both team have also played a last qualifying match and that was bad day of the Kings XI Punjab that they are the champions but lost the match

Today’s match is at a really great and big pitch M.Chinnaswamy Stadium, Bengaluru. This is really the batting pitch and very great for the batsman like Glenn Maxwell and Virender Sehwag he’s really a great batsman and he really hotted the bunch of sixes against the Chennai Super Kings. The best total on this pitch was nearly about 190 the best scores on this pitch which is really a great total for any team to win and this is the best chance for the Kings XI Punjab to show their magic on this great pitch

They’re really brave and shown their magic in this IPL season and they played very well and this is really tough for them because they’ve also lost the Qualifier 1 match from the KKR and again they’re playing final with KKR and this is very hard for them to win because they’ve got pressure from that team who lost them . Now let’s talk about the great player of Kings XI Punjab. They’ve a great list of sixer players. Who boost up the match and make them able to win with the high difference of wickets and scores. As we all know that Virender Sehwag has really shown his best in the last match against CSK. He played really well in that Innings and he hit the sixes which revived his past and he made the crowd happy by this because he was also the great legend of the cricket in the History of the Indian cricket team. Glenn Maxwell who was the top batsman in this event but in recent days he was unable to show his great performance but this time he has to play like he played for 90 scores on nearly 35 balls. We all know that Australia cricket players are the stones and he’s one of them that’s played well in the whole event and make his team proud on him. Today we’re really expecting a great innings from him because this is the last match of this event and he’ll be lucky and become legend if he played like past in this innings. Our pray is with him that this magic will happen. Against RR he scored very well and against CSK in the 6th match he hatted 95 scores for 45 balls. Another great player of this team Wriddhiman Saha who really taken place of Maxwell when he was not playing well then Saha really supported the Punjab team and given them a big chances to win the matches he’s also a great wicket keeper of this team and he play well in the opening time he give the great start-up to the whole team and make them able to win Saha hatted well against the SRH team 54 scores on just 25 balls by hit a bunch of boundaries amazing performance. George Bailey the great captain behind this team who is supporting this team and made this team the topper and champion of the IPL points table. He’s has a great leading capabilities and he plan really well that when to change bowlers and when to send which batsman and where to place fielding. His planning is the backbone of the Kings team. Manan Vohra a one of the player who is competent of Saha and he’s give them a great partnership and play well with him and support his team to the extent. They both are the leading of the teams. Further you can take the bowler of this great team Lakshmipathy Balaji, Sandeep Sharma and Cheteshwar Pujara this is the combination of the spinner of this team and they have great cricket history and Balaji is the legend of the past cricket in the West Indies. Akshar Patel, Mitchell Johnson fast bowler of this team they spin in such a way that batsman get confused and hit it and they are great wicket takers of this team. As we all know this is the team of the pretty actress of the Bollywood Preity Zinta and she support her team very well and they also play well for her and she’s really happy by getting this team and such team which make her proud. So today match is between the two Bollywood legends and best actor and actress yes both of them are Kings of Bollywood. Preity Zinta and Shahrukh Khan both are against today as the people were expecting that the match should be played between KKR vs KXIP. This is team that played 14 match in this league and got victory in the 11 matches and lost only the 3 matches due to hard luck because they are the champions

This is the one of the superior team of the IPL season 2014. Gautam Gambhir the best Indian International team player is the captain of this team and leading well that they’ve reached to the final by leaving the Kings XI Punjab behind but today they also have the tough time to face this legend team of all the season they had a great last winning but leaving KXIP by 28 runs but their winning percentage is less as comparing to Kings XI Punjab they’ve also played 14 matches but won only 9 matches and lost almost in 5 matches this is the bad impact of this team according to their past they’ve low chances to win so they’ve to work more hard in this match to safe their win and become legend of this IPL season. Robin Uthappa he is the wicket keeper of this team and he’s really a excellence player that he understand the condition and he can play in any condition of the match and he is really good in losting the pressure on the team whenever the team is in the pressure. Manish Pandey great player of this team and play very well according to the condition of the team he hit very well against Kings XI Punjab Yusuf Pathan, Shakib Al Hasan and Ryan ten Doeschate they are the cool batsman of this team. The best bowlers of this team Piyush Chawla, Morne Morkel and Sunil Narine who has really built their name in this season of the IPL and played really very well and their bowling is very attacking Narine is the best wicket taker spinner bowler no can understand his great googly technique. Owner of this team is as we all know that the great Bollywood legend Shahrukh Khan.

According to the condition and the winning percentage the astrogical prediction say that KXIP will win. Let’s see this final and great match between the two of the best teams .

Previous: How to make a cheap and blasting cracker easily at home
Next: England vs Sri Lanka Final 5th ODI prediction | Eng vs Sl preview 3 June 2014