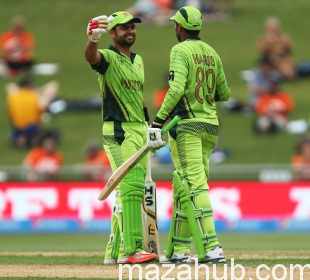 Pakistan is really great team but South Africa is also powerful . So the competition will be very tough for the teams.

Pakistan team won the toss and choose to bat first. Pakistan team scored 222 and lost all wickets after playing 46.4 overs.

Now South Africa will play and start the match . So let’s see what they can do .

South Africa team made 202 scores after losing all wickets and Pakistan team won by 29 runs.

Pakistan team win the toss and started a good game. let’s see the match and watch highlights after the Match.

Catch Of the Tournament : Watch now

India did the bowl first. Although India doesn’t have the very good bowlers but it really played well against West Indies. West Indies was at the 3rd place and after degrading, it has come to the 4th place. Pakistan has achieved the 3rd place. West Indies upper and middle order got out after making just few runs. All the pressure was on the lower order all-rounders. But Holder tried his best to save the team from the very small target. West Indies tried hard and gave the target of 182 runs. Target was quite small and the match was seeming to be one sided.

But West Indies didn’t allow to happen so. First 5 wickets of India went down within 100 runs. In trying to attempt so, 6th wicket also got out. India was almost in the pressure. Ashwin and Dhoni made the team to win the match. If any one of these 2 wickets would have lost, West Indies has won the match most probably. India has won the 4 out of 4 matches. India remained the unbeatable team in the tournament.

Now there is the match between the teams who are at the 2nd and 3rd place in the pool B. South Africa VS Pakistan will be held tomorrow. Both are the top team of the point’s table. But South Africa has the quite good history going on in this tournament. It is also not fair to underestimate the team Pakistan because it raised itself from the last position. Pakistan was at the last place and was the team who hasn’t won any single match.

But after that, Pakistan won its two of matches consecutively. India has confirmed qualified for the quarter finals. Pakistan has the options. It is fair chances that there will be rain tomorrow. If it rains, match can be cancelled.

In that way, both teams will get the 1 point. This is also good for Pakistan because South Africa is really the hard team at the moment to be beaten out. Pakistan needs to win the match. Pakistan has the strong bowling attack but South African batsmen are also hard to play all these type of bowlers.